,
Noun.
[OE.
henge
,
heeng
; akin to D.
heng
, LG.
henge
, Prov. E.
hingle
a small hinge; connected with
hang
, v., and Icel.
hengja
to hang. See
Hang
.]
1.
The hook with its eye, or the joint, on which a door, gate, lid, etc., turns or swings; a flexible piece, as a strip of leather, which serves as a joint to turn on.
The gate self-opened wide,
On golden
hinges
turning.
Milton.
2.
That on which anything turns or depends; a governing principle; a cardinal point or rule;
as, this argument was the
hinge
on which the question turned
.
3.
One of the four cardinal points, east, west, north, or south.
[R.]
When the moon is in the
hinge
at East.
Creech.
Nor slept the winds . . . but rushed abroad.
Milton.
Hinge joint
.
(a)
(Anat.)
See
Ginglymus
.
(b)
(Mech.)
Any joint resembling a hinge, by which two pieces are connected so as to permit relative turning in one plane.
–
To be off the hinges
,
to be in a state of disorder or irregularity; to have lost proper adjustment.
Tillotson.

,
Verb.
I.
To stand, depend, hang, or turn, as on a hinge; to depend chiefly for a result or decision or for force and validity; – usually with on or upon;
as, the argument
hinges
on this point
.
I. Taylor

,
Noun.
hinj. [This word appears to be connected with hang,and with angle,the verb.]
1. The hook or joint on which a door or gate turns.
The gate self-opened wide
On golden hinges turning.
2.
That on which any thing depends or turns; a governing principle, rule or point. This argument was the hinge on which the question turned.
3.
A cardinal point; as east, west, north or south. [Little used.]
To be off the hinges, is to be in a state of disorder or irregularity.

,
Verb.
I.
To stand, depend or turn, as on a hinge. The question hinges on this single point. 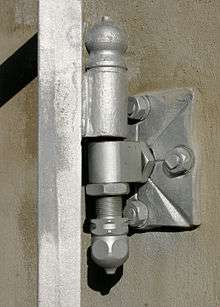 device for the pivoting of a door
philately: paper rectangle for affixing postage stamps — see stamp hinge
point in time, on which subsequent events depend
statistics: median of upper or lower half of a batch — see quartile

to attach by a hinge
to depend on something