,
Noun.
[Cf. D.
trom
,
trommel
, LG.
trumme
, G.
trommel
, Dan.
tromme
, Sw.
trumma
, OHG.
trumba
a trumpet, Icel.
pruma
a clap of thunder, and as a verb, to thunder, Dan.
drum
a booming sound,
drumme
to boom; prob. partly at least of imitative origin; perh. akin to E.
trum
, or
trumpet
.]
1.
(Mus.)
An instrument of percussion, consisting either of a hollow cylinder, over each end of which is stretched a piece of skin or vellum, to be beaten with a stick; or of a metallic hemisphere (kettledrum) with a single piece of skin to be so beaten; the common instrument for marking time in martial music; one of the pair of tympani in an orchestra, or cavalry band.
The
drums
cry bud-a-dub.
Gascoigne.
2.
Anything resembling a drum in form
; as:
(a)
A sheet iron radiator, often in the shape of a drum, for warming an apartment by means of heat received from a stovepipe, or a cylindrical receiver for steam, etc.
(b)
A small cylindrical box in which figs, etc., are packed.
(c)
(Anat.)
The tympanum of the ear; – often, but incorrectly, applied to the tympanic membrane.
(d)
(Arch.)
One of the cylindrical, or nearly cylindrical, blocks, of which the shaft of a column is composed; also, a vertical wall, whether circular or polygonal in plan, carrying a cupola or dome.
(e)
(Mach.)
A cylinder on a revolving shaft, generally for the purpose of driving several pulleys, by means of belts or straps passing around its periphery; also, the barrel of a hoisting machine, on which the rope or chain is wound.
3.
(Zool.)
See
Drumfish
.
4.
A noisy, tumultuous assembly of fashionable people at a private house; a rout.
[Archaic]
Not unaptly styled a
drum
, from the noise and emptiness of the entertainment.
Smollett.
☞ There were also drum major, rout, tempest, and hurricane, differing only in degrees of multitude and uproar, as the significant name of each declares.
5.
A tea party; a kettledrum.
G. Eliot.
Bass drum
.
See in the Vocabulary.
–
Double drum
.
See under
Double
.

,
Verb.
T.
1.
To execute on a drum, as a tune.
2.
(With out) To expel ignominiously, with beat of drum;
as, to
drum
out a deserter or rogue from a camp, etc.
3.
(With up) To assemble by, or as by, beat of drum; to collect; to gather or draw by solicitation;
as, to
drum
up recruits; to
drum
up customers.

,
Noun.
[G., L.]
1.
A martial instrument of music, in form of a hollow cylinder, and covered at the ends with vellum, which is stretched or slackened at pleasure.
2.
In machinery, a short cylinder revolving on an axis, generally for the purpose of turning several small wheels, by means of straps passing round its periphery.
3.
The drum of the ear, the tympanum, or barrel of the ear; the hollow part of the ear, behind the membrane of the tympanum. The latter is a tense membrane, which closes the external passage of the ear, and receives the vibrations of the air. 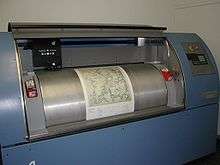 A scanning machine including a large drum (cylindrical object).