(krăk′ẽr)
,
Noun.
1.
One who, or that which, cracks.
2.
A noisy boaster; a swaggering fellow.
[Obs.]
What
cracker
is this same that deafs our ears?
Shakespeare
3.
A small firework, consisting of a little powder inclosed in a thick paper cylinder with a fuse, and exploding with a sharp noise; – usually called
firecracker
.
4.
A thin, dry biscuit, often hard or crisp;
as, a Boston
cracker
; a Graham
cracker
; a soda
cracker
; an oyster
cracker
.
5.
A nickname to designate a poor white in some parts of the Southern United States.
Bartlett.
6.
(Zool.)
The pintail duck.
7.
pl.
(Mach.)
A pair of fluted rolls for grinding caoutchouc.
Knight.

,
Noun.
1.
A noisy boasting fellow.
2.
A rocket; a quantity of gunpowder confined so as to explode with noise.
3.
A hard biscuit.
4.
That which cracks any thing. 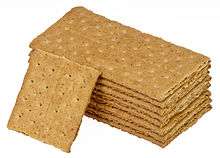 Unlike most crackers, graham crackers are sweet.

Sense of computer cracker, crack, cracking, were promoted in the 1980s as an alternative to hacker, by programmers concerned about negative public associations of hack, hacking ‎(“creative computer coding”). See Citations:cracker.

Various theories exists regarding this term's application to poor white Southerners. One theory holds that it originated with disadvantaged corn and wheat farmers ("corncrackers"), who cracked their crops rather than taking them to the mill. Another theory asserts that it was applied due to Georgia and Florida settlers (Florida crackers) who cracked loud whips to drive herds of cattle, or, alternatively, from the whip cracking of plantation slave drivers. Yet another theory maintains that the term cracker was in use in Elizabethan times to describe braggarts (see crack ‎(“to boast”)). An early reference that supports this sense is a letter dated June 27, 1766 from Gavin Cochrane to the Earl of Dartmouth:

I should explain to your Lordship what is meant by crackers; a name they have got from being great boasters; they are a lawless set of rascalls on the frontiers of Virginia, Maryland, the Carolinas and Georgia, who often change their places of abode.[1][2]