,
Noun.
[F.
biscuit
(cf. It.
biscotto
, Sp.
bizcocho
, Pg.
biscouto
), fr. L.
bis
twice +
coctus
, p. p. of
coquere
to cook, bake. See
Cook
, and cf.
Bisque
a kind of porcelain.]
1.
A kind of unraised bread, of many varieties, plain, sweet, or fancy, formed into flat cakes, and bakes hard;
as, ship
biscuit
.
According to military practice, the bread or
biscuit
of the Romans was twice prepared in the oven.
Gibbon.
2.
A small loaf or cake of bread, raised and shortened, or made light with soda or baking powder. Usually a number are baked in the same pan, forming a sheet or card.
3.
Earthen ware or porcelain which has undergone the first baking, before it is subjected to the glazing.
4.
(Sculp.)
A species of white, unglazed porcelain, in which vases, figures, and groups are formed in miniature.
Meat biscuit
,
an alimentary preparation consisting of matters extracted from meat by boiling, or of meat ground fine and combined with flour, so as to form biscuits.

,
Noun.
bis'kit. [L. bis, twice,and cuit, baked.]
1.
A kind of bread, formed into cakes, and baked hard for seamen.
2.
A cake, variously made, for the use of private families. The name, in England, is given to a composition of flour, eggs, and sugar. With us the name is given to a composition of flour and butter, made and baked in private families. But the compositions under this denomination are very various.
3.
The body of an earthen vessel, in distinction from the glazing. 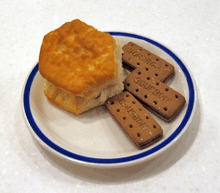 A soft and flaky American biscuit (2) on the left and a hard British biscuit (1) on the right. 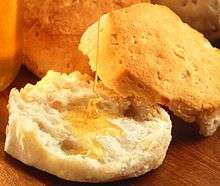 This American biscuit (2) has been broken open to show its interior; honey is being drizzled onto it. 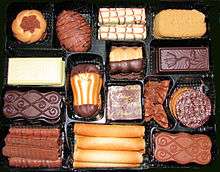 The hard, flat, baked goods in tins like these are sometimes sold as biscuits (1) even in America, not just in the UK.
La Nourrice biscuit (5) after Louis Boizot.

For usage examples of this term, see Citations:biscuit.