(lĕnz)
,
Noun.
;
pl.
Lenses
(-ĕz)
.
[L.
lens
a lentil. So named from the resemblance in shape of a double convex lens to the seed of a lentil. Cf.
Lentil
.]
(Opt.)
A piece of glass, or other transparent substance, ground with two opposite regular surfaces, either both curved, or one curved and the other plane, and commonly used, either singly or combined, in optical instruments, for changing the direction of rays of light, and thus magnifying objects, or otherwise modifying vision. In practice, the curved surfaces are usually spherical, though rarely cylindrical, or of some other figure.
Lenses
☞ Of spherical lenses, there are six varieties, as shown in section in the figures herewith given: viz.,
a
plano-concave;
b
double-concave;
c
plano-convex;
d
double-convex;
e
converging concavo-convex, or converging meniscus;
f
diverging concavo-convex, or diverging meniscus.
Crossed lens
(Opt.)
,
a double-convex lens with one radius equal to six times the other.
–
Crystalline lens
.
(Anat.)
See
Eye
.
–
Fresnel lens
(Opt.)
,
a compound lens formed by placing around a central convex lens rings of glass so curved as to have the same focus; used, especially in lighthouses, for concentrating light in a particular direction; – so called from the inventor.
–
Multiplying lens
or
Multiplying glass
(Opt.)
,
a lens one side of which is plane and the other convex, but made up of a number of plane faces inclined to one another, each of which presents a separate image of the object viewed through it, so that the object is, as it were, multiplied.
–
Polyzonal lens
.
See
Polyzonal
.

,
Noun.
plu.
lenses. [L. lens, a lentil.] A transparent substance, usually glass, so formed that rays of light passing through it are made to change their direction, and to magnify or diminish objects at a certain distance. Lenses are double-convex, or convex on both sides; double-concave, or concave on both sides; plano-convex, or plano-concave, that is, with one side plane, and the other convex or concave; or convex on one side and concave on the other; the latter is called a meniscus. 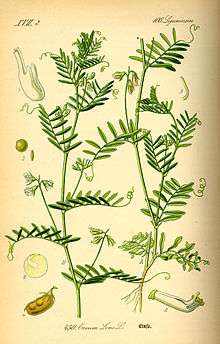 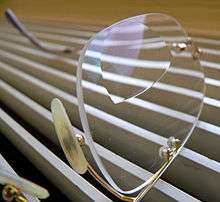 The lenses in bifocals bend light, distorting the appearance of the background.

object focusing or defocusing the light passing through it
device which focuses or defocuses electron beams
geometry: convex shape bounded by two circular arcs
biology: genus of the legume family; its bean
anatomy: transparent crystalline structure in the eye