,
Noun.
[OE.
governor
,
governour
, OF.
governeor
, F.
gouverneur
, fr. L.
gubernator
steersman, ruler, governor. See
Govern
.]
1.
One who governs; especially, one who is invested with the supreme executive authority in a State; a chief ruler or magistrate;
as, the
governor
of Pennsylvania
.
“The governor of the town.”
Shak.
2.
One who has the care or guardianship of a young man; a tutor; a guardian.
3.
(Naut.)
A pilot; a steersman.
[R.]
☞ The illustration shows a form of governor commonly used for steam engines, in wich a heavy sleeve (a) sliding on a rapidly revolving spindle (b), driven by the engine, is raised or lowered, when the speed varies, by the changing centrifugal force of two balls (c c) to which it is connected by links (d d), the balls being attached to arms (e e) which are jointed to the top of the spindle. The sleeve is connected with the throttle valve or cut-off through a lever (f), and its motion produces a greater supply of steam when the engine runs too slowly and a less supply when too fast.
Governor cut-off
(Steam Engine)
,
a variable cut-off gear in which the governor acts in such a way as to cause the steam to be cut off from entering the cylinder at points of the stroke dependent upon the engine’s speed.
–
Hydraulic governor
(Mach.)
,
a governor which is operated by the action of a liquid in flowing; a cataract.

,
Noun.
He that governs, rules or directs; one invested with supreme authority. The Creator is the rightful governor of all his creatures.
1.
One who is invested with supreme authority to administer or enforce the laws; the supreme executive magistrate of a state, commmunity, corporation or post. Thus, in America, each state has its governor; Canada has its governor.
2.
A tutor; one who has the care of a young man; one who instructs him and forms his manners.
3.
A pilot; one who steers a ship. James 3.
4.
One possessing delegated authority. Joseph was governor over the land of Egypt. Obadiah was governor over Ahab's house. Damascus had a governor under Aretas the king. 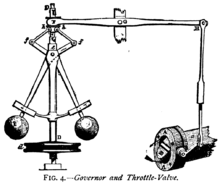 A flyball governor (mechanical), connected to a linkage to regulate flow.

leader of a region or state
device which regulates or controls

From Middle English govenour, from Old French gouvreneur, from Latin gubernator, from Ancient Greek κυβερνήτης ‎(kubernḗtēs, “steersman, pilot, guide”), from κυβερνάω ‎(kubernáō, “to steer, to drive, to guide, to act as a pilot”), from a Mediterranean substrate, likely Pre-Greek.