(băl′ans)
,
Noun.
[OE.
balaunce
, F.
balance
, fr. L.
bilanx
,
bilancis
, having two scales;
bis
twice (akin to E.
two
) +
lanx
plate, scale.]
1.
An apparatus for weighing.
☞ In its simplest form, a balance consists of a beam or lever supported exactly in the middle, having two scales or basins of equal weight suspended from its extremities. Another form is that of the Roman balance, our steelyard, consisting of a lever or beam, suspended near one of its extremities, on the longer arm of which a counterpoise slides. The name is also given to other forms of apparatus for weighing bodies, as to the combinations of levers making up platform scales; and even to devices for weighing by the elasticity of a spring.
2.
Act of weighing mentally; comparison; estimate.
A fair
balance
of the advantages on either side.
Atterbury.
3.
Equipoise between the weights in opposite scales.
4.
The state of being in equipoise; equilibrium; even adjustment; steadiness.
And hung a bottle on each side
To make his
balance
true.
Cowper.
The order and
balance
of the country were destroyed.
Buckle.
English workmen completely lose their
balance
.
J. S. Mill.
5.
An equality between the sums total of the two sides of an account;
as, to bring one’s accounts to a
balance
; – also, the excess on either side;
as, the
balance
of an account
.
“A balance at the banker's.”
Thackeray.
I still think the
balance
of probabilities leans towards the account given in the text.
J. Peile.
6.
(Horol.)
A balance wheel, as of a watch, or clock. See
Balance wheel
(in the Vocabulary).
7.
(Astron.)
(a)
The constellation Libra.
(b)
The seventh sign in the Zodiac, called Libra, which the sun enters at the equinox in September.
8.
A movement in dancing. See
Balance
,
Verb.
T.
, 8.
Balance electrometer
,
a kind of balance, with a poised beam, which indicates, by weights suspended from one arm, the mutual attraction of oppositely electrified surfaces.
Knight.
–
Balance fish
.
(Zool.)
See
Hammerhead
.
–
Balance knife
,
a carving or table knife the handle of which overbalances the blade, and so keeps it from contact with the table.
–
Balance of power
(Politics)
,
such an adjustment of power among sovereign states that no one state is in a position to interfere with the independence of the others; international equilibrium; also, the ability (of a state or a third party within a state) to control the relations between sovereign states or between dominant parties in a state.
–
Balance sheet
(Bookkeeping)
,
a paper showing the balances of the open accounts of a business, the debit and credit balances footing up equally, if the system of accounts be complete and the balances correctly taken.
–
Balance thermometer
,
a thermometer mounted as a balance so that the movement of the mercurial column changes the inclination of the tube. With the aid of electrical or mechanical devices adapted to it, it is used for the automatic regulation of the temperature of rooms warmed artificially, and as a fire alarm.
–
Balance of torsion
.
See
Torsion Balance
.
–
Balance of trade
(Pol. Econ.)
,
an equilibrium between the money values of the exports and imports of a country; or more commonly, the amount required on one side or the other to make such an equilibrium.
–
Balance valve
,
a valve whose surfaces are so arranged that the fluid pressure tending to seat, and that tending to unseat, the valve, are nearly in equilibrium; esp., a puppet valve which is made to operate easily by the admission of steam to both sides. See
Puppet valve
.
–
Hydrostatic balance
.
See under
Hydrostatic
.
–
To lay in balance
,
to put up as a pledge or security.
[Obs.]
Chaucer.
–
To strike a balance
,
to find out the difference between the debit and credit sides of an account.

(băl′ans)
,
Verb.
T.
[
imp. & p. p.
Balanced
(băl′anst)
;
p. pr. & vb. n.
Balancing
(băl′an-sĭng)
.]
[From
Balance
,
Noun.
: cf. F.
balancer
.]
1.
To bring to an equipoise, as the scales of a balance by adjusting the weights; to weigh in a balance.
2.
To support on a narrow base, so as to keep from falling;
as, to
balance
a plate on the end of a cane; to
balance
one's self on a tight rope
.
3.
To equal in number, weight, force, or proportion; to counterpoise, counterbalance, counteract, or neutralize.
One expression . . . must check and
balance
another.
Kent.
4.
To compare in relative force, importance, value, etc.; to estimate.
Balance
the good and evil of things.
L'Estrange.
5.
To settle and adjust, as an account; to make two accounts equal by paying the difference between them.
I am very well satisfied that it is not in my power to
balance
accounts with my Maker.
Addison.
6.
To make the sums of the debits and credits of an account equal; – said of an item;
as, this payment, or credit,
balances
the account
.
7.
To arrange accounts in such a way that the sum total of the debits is equal to the sum total of the credits;
as, to
balance
a set of books
.
8.
(Dancing)
To move toward, and then back from, reciprocally;
as, to
balance
partners
.
9.
(Naut.)
To contract, as a sail, into a narrower compass;
as, to
balance
the boom mainsail
.
Balanced valve
.
See
Balance valve
, under
Balance
,
Noun.
Syn. – To poise; weigh; adjust; counteract; neutralize; equalize.

,
Verb.
I.
1.
To have equal weight on each side; to be in equipoise;
as, the scales
balance
.
2.
To fluctuate between motives which appear of equal force; to waver; to hesitate.
He would not
balance
or err in the determination of his choice.
Locke.
3.
(Dancing)
To move toward a person or couple, and then back.

,
Noun.
[L.bilanx, bis, twice, and lanz, a dish, the double dish.]
1.
A pair of scales, for weighing commodities. It consists of a beam or lever suspended exactly in the middle, with a scale or basin hung to each extremity, of precisely equal weight.
The Roman balance, our steel-yard, consists of a lever or beam, movable on a center, and suspended near one of its extremities. Hence,
2.
One of the simple powers in mechanics, used for determining the equality or difference of weight in heavy bodies,and consequently their masses or quantity of matter.
3.
Figuratively, an impartial state of the mind, in deliberating; or a just estimate of the reasons and arguments on
both sides of a question, which gives to each its due weight, or
15
force and importance.
4.
As balance signifies equal weight, or equality, it is by custom used for the weight or sum necessary to make two unequal weights or sums equal; that which is necessary to bring them to a balance or equipoise. Hence, in accounts, balance is the difference of two sums; as upon an adjustment of accounts, a balance was found against A, in favor of B. Hence, to pay a balance, is to pay the difference and make the two accounts equal.
5.
Balance of trade is an equal exportation of domestic productions, and importation of foreign. But, usually, the term is applied to the difference between the amount or value of the commodities exported and imported. Hence the common expression, the balance of trade is against or in favor of a country.
6.
Equipoise, or an equal state of power between nations; as the 'balance of power.'
7.
Equipoise, or an equal state of the passions.
The balance of the mind.
8.
That which renders weight or authority equal.
The only balance attempted against the ancient kings, was a body of nobles.
9.
The part of a clock or watch which regulates the beats.
10.
In astronomy, a sign in the zodiac, called in Latin Libra, which the sun enters at the equinox in September.
The hydrostatic balance is an instrument to determine the specific gravity of fluid and solid bodies.
The assay balance is one which is used in docimastic operations, to determine the weight of minute bodies.

,
Verb.
T.
To adjust the weights in the scales of a balance so as to bring them to an equipoise. Hence,
2. To weigh reasons; to compare, by estimating the relative force, importance, or value of different things; as, to balance good and evil.
3.
To regulate different powers, so as to keep them in a state of just proportion; as, to balance Europe, or the powers of Europe.
4.
To counterpoise; to make of equal weight or force; to make equipollent; as, one species of attraction balances another.
One expression in the letter check and balance another.
5.
To settle and adjust, as an account; to find the difference of two accounts, and to pay the balance, or difference, and make them equal.
6.
In seamanship, to contract a sail, by rolling up a small part of it at one corner.

,
Verb.
I.
To have on each side equal weight; to be on a poise.
2.
To hesitate; to fluctuate between motives which appear of equal force, as a balance plays when poised by equal weights.
Between right and wrong, never balance a moment. 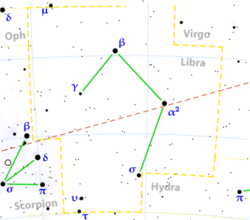 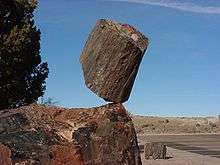 A rock balanced on one corner.

equilibrium
mental equilibrium
something of equal weight used to provide equilibrium
scales
awareness of both viewpoints
overall result of conflicting forces
apparent harmony in art
accounting: list of credits and debits
difference between credit and debit of an account
device that regulates the speed of a watch
remainder
astrology: Libra — see Libra 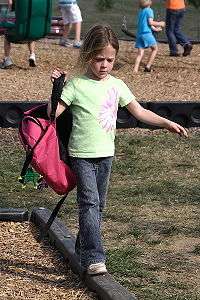 to bring to equipoise
to make concepts agree
to hold precariously
to estimate — see estimate
dancing: to move toward, and then back from, reciprocally
nautical: to contract a sail
accounting: to make credits and debits correspond
be in equilibrium
to have matching credits and debits