(blād)
,
Noun.
[OE.
blade
,
blad
, AS.
blæd
leaf; akin to OS., D., Dan., & Sw.
blad
, Icel.
blað
, OHG.
blat
, G.
blatt
, and perh. to L.
folium
, Gr.
φύλλον
. The root is prob. the same as that of AS.
blōwan
, E.
blow
, to blossom. See
Blow
to blossom, and cf.
Foil
leaf of metal.]
1.
Properly, the leaf, or flat part of the leaf, of any plant, especially of gramineous plants. The term is sometimes applied to the spire of grasses.
The crimson dulse . . . with its waving
blade
.
Percival.
First the
blade
, then ear, after that the full corn in the ear.
Mark iv. 28.
2.
The cutting part of an instrument;
as, the
blade
of a knife or a sword
.
3.
The broad part of an oar; also, one of the projecting arms of a screw propeller.
4.
The scapula or shoulder blade.
5.
pl.
(Arch.)
The principal rafters of a roof.
Weale.
6.
pl.
(Com.)
The four large shell plates on the sides, and the five large ones of the middle, of the carapace of the sea turtle, which yield the best tortoise shell.
De Colange.
7.
A sharp-witted, dashing, wild, or reckless, fellow; – a word of somewhat indefinite meaning.
He saw a turnkey in a trice
Fetter a troublesome
blade
.
Coleridge.
8.
The flat part of the tongue immediately behind the tip, or point.

,
Verb.
I.
To put forth or have a blade.
As sweet a plant, as fair a flower, is faded
As ever in the Muses’ garden
bladed
.
P. Fletcher.

,
Noun.
[Gr.broad.]
1.
The stalk or spire of a plant,particularly of grass and corn; but applicable to the stalk of any herbaceous plant, whether green or dry.
2.
A leaf. In this sense much used in the Southern States of N. America, for the leaves of maize, which are used as fodder.
3.
The cutting part of an instrument, as the blade of a knife, or sword,so named from its length or breadth. Usually, it is made of iron or steel, but may be of any other metal, cast or wrought to an edge or point. Also,the broad part of an oar.
4.
The blade of the shoulder,shoulder-blade, or blade-bone, is the scapula, or scapular bone. It is the broad upper bone of the shoulder, so called from its resemblance to a blade or leaf.
5.
A brisk man; a bold, forward man; a rake. 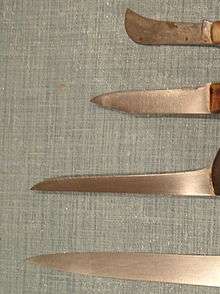 sharp-edged or pointed working end of a tool or utensil
thin plate, foil
the flat part of a leaf or petal
slang term for a weapon such as a dagger
flat outer part of an oar
part of a propeller
airfoil in windmills and windturbines

(informal) to skate on rollerblades