,
Verb.
I.
1.
To make a quick strike, or repeated strokes, with an ax or other sharp instrument.
2.
To do something suddenly with an unexpected motion; to catch or attempt to seize.
Out of greediness to get both, he
chops
at the shadow, and loses the substance.
L'Estrange.
3.
To interrupt; – with in or out.
This fellow interrupted the sermon, even suddenly
chopping
in.
Latimer.

,
Verb.
T.
[Cf. D.
koopen
to buy. See
Cheapen
,
Verb.
T.
, and cf.
Chap
,
Verb.
I.
, to buy.]
1.
To barter or truck.
2.
To exchange; substitute one thing for another.
We go on
chopping
and changing our friends.
L'Estrange.
To chop logic
,
to dispute with an affected use of logical terms; to argue sophistically.

,
Verb.
I.
1.
To purchase by way of truck.
2.
(Naut.)
To vary or shift suddenly;
as, the wind
chops
about
.
3.
To wrangle; to altercate; to bandy words.
Let not the counsel at the bar
chop
with the judge.
Bacon.

,
Noun.
A change; a vicissitude.
Marryat.

, v.t.
1.
To cut off or separate, by striking with a sharp instrument, either by a single blow or by repeated blows; as, to chop off a head; to chop wood.
2.
To cut into small pieces; to mince; as, to chop meat; to chop straw.
3.
To grand and mince with the teeth; to devour eagerly; with up; as, to chop up an entertainment.
4.
To break or open into chinks or fissures; to crack; to chap. [See Chap.]

, v.i.
1.
To buy, or rather to barter, truck, exchange.
2.
To exchange; to put one thing in the place of another; as, to chop and change our friends.
3.
To bandy; to altercate; to return one word or thing for another.
Let not the council chop with the judge.

,
Verb.
I.
To turn, vary, change or shift suddenly; as in the seamans phrase, the wind chops, or chops about. [The various senses of this verb seem to center in that of thrusting, driving, or a sudden motion or exertion of force.]

, n.
1.
A piece chopped off; a small piece of meat; as a mutton chop.
2.
A crack or cleft. See Chap, which, with the broad sound of a, is often pronounced chap.
3.
The chap; the jaw; plu. The jaws; the mouth; the sides of a rivers mouth or channel. [See Chap.] 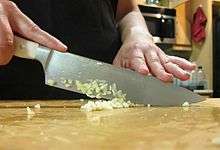 to cut into pieces
to sever with an axe or similar
baseball: to hit the ball downward
poker: to divide the pot

Of uncertain origin, perhaps a variant of chap.