,
Noun.
[OF.
gravele
, akin to F.
gr?ve
a sandy shore, strand; of Celtic origin; cf. Armor.
grouan
gravel, W.
gro
coarse gravel, pebbles, and Skr.
grāvan
stone.]
1.
Small stones, or fragments of stone; very small pebbles, often intermixed with particles of sand.
2.
(Med.)
A deposit of small calculous concretions in the kidneys and the urinary or gall bladder; also, the disease of which they are a symptom.
Gravel powder
,
a coarse gunpowder; pebble powder.

,
Verb.
T.
[
imp. & p. p.
Graveled
or
Gravelled
;
p. pr. & vb. n.
Graveling
or
Gravelling
.]
1.
To cover with gravel;
as, to gravel a walk
.
2.
To run (as a ship) upon the gravel or beach; to run aground; to cause to stick fast in gravel or sand.
When we were fallen into a place between two seas, they
graveled
the ship.
Acts xxvii. 41 (Rhemish version).
Willam the Conqueror . . . chanced as his arrival to be
graveled
; and one of his feet stuck so fast in the sand that he fell to the ground.
Camden.
3.
To check or stop; to embarrass; to perplex.
[Colloq.]
When you were
graveled
for lack of matter.
Shakespeare
The physician was so
graveled
and amazed withal, that he had not a word more to say.
Sir T. North.
4.
To hurt or lame (a horse) by gravel lodged between the shoe and foot.

,
Noun.
1.
Small stones or fragments of stone, or very small pebbles, larger than the particles of sand, but often intermixed with them.
2.
In medicine, small calculous concretions in the kidneys and bladder. 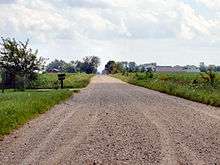 To apply a layer of gravel to the surface of a road, etc