(trŏf)
,
Noun.
[OE.
trough
,
trogh
, AS.
trog
,
troh
; akin to D., G., & Icel.
trog
, Sw.
tråg
, Dan.
trug
; probably originally meaning, made of wood, and akin to E.
tree
. √63 & 241. See
Tree
, and cf.
Trug
.]
1.
A long, hollow vessel, generally for holding water or other liquid, especially one formed by excavating a log longitudinally on one side; a long tray; also, a wooden channel for conveying water, as to a mill wheel.
2.
Any channel, receptacle, or depression, of a long and narrow shape;
as,
trough
between two ridges, etc
.
Trough gutter
(Arch.)
,
a rectangular or V-shaped gutter, usually hung below the eaves of a house.
–
Trough of the sea
,
the depression between two waves.

,
Noun.
trauf.
1.
A vessel hollow longitudinally, or a large log or piece of timber excavated longitudinally on the upper side; used for various purposes.
2.
A tray. [This is the same word dialectically altered.]
3.
A canoe; the rude boat of uncivilized men.
4.
The channel that conveys water, as in mills.
The trough of the sea, the hollow between waves. 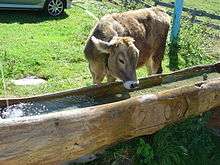