(rōl′ẽr)
,
Noun.
1.
One who, or that which, rolls; especially, a cylinder, sometimes grooved, of wood, stone, metal, etc., used in husbandry and the arts.
2.
A bandage; a fillet; properly, a long and broad bandage used in surgery.
3.
(Naut.)
One of series of long, heavy waves which roll in upon a coast, sometimes in calm weather.
4.
A long, belt-formed towel, to be suspended on a rolling cylinder; – called also
roller towel
.
5.
(Print.)
A cylinder coated with a composition made principally of glue and molassess, with which forms of type are inked previously to taking an impression from them.
W. Savage.
6.
A long cylinder on which something is rolled up;
as, the
roller
of a map
.
7.
A small wheel, as of a caster, a roller skate, etc.
8.
(Zool.)
Any insect whose larva rolls up leaves; a leaf roller. see
Tortrix
.
9.
[CF. F.
rollier
.]
(Zool.)
Any one of numerous species of Old World picarian birds of the family
Coraciadae
. The name alludes to their habit of suddenly turning over or “tumbling” in flight.
10.
(Zool.)
Any species of small ground snakes of the family
Tortricidae
.
Ground roller
(Zool.)
,
any one of several species of Madagascar rollers belonging to
Atelornis
and allied genera. They are nocturnal birds, and feed on the ground.
–
Roller bolt
,
the bar in a carriage to which the traces are attached; a whiffletree.
[Eng.]
–
Roller gin
,
a cotton gin inn which rolls are used for separating the seeds from the fiber.
–
Roller mill
.
See under
Mill
.
–
Roller skate
,
a skate which has small wheels in the place of the metallic runner; – designed for use in skating upon a smooth, hard surface, other than ice.

, n.
1.
That which rolls; that which turns on its own axis; particularly, a cylinder of wood, stone or metal, used in husbandry and the arts. Rollers are of various kinds and used for various purposes.
2.
A bandage; a fillet; properly, a long and broad bandage used in surgery.
3.
A bird of the magpie kind, about the size of a jay.
A bird of the genus Coracias, found in Europe; called also the German parrot. 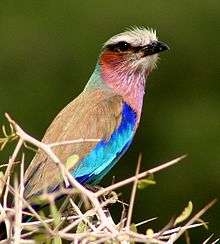 A lilac-crested roller (bird of the family Coraciidae), Coracias caudata.

This verb conjugates as a first-group verb ending in -er. The forms that would normally end in *-oll, *-olls, *-ollt are modified to ol, ous, out. Old French conjugation varies significantly by date and by region. The following conjugation should be treated as a guide.