,
Noun.
[OE.
winge
,
wenge
; probably of Scand. origin; cf. Dan. & Sw.
vinge
, Icel.
vængr
.]
1.
One of the two anterior limbs of a bird, pterodactyl, or bat. They correspond to the arms of man, and are usually modified for flight, but in the case of a few species of birds, as the ostrich, auk, etc., the wings are used only as an assistance in running or swimming.
As an eagle stirreth up her nest, fluttereth over her young, spreadeth abroad her
wings
, taketh them, beareth them on her
wings
.
Deut. xxxii. 11.
☞ In the wing of a bird the long quill feathers are in series. The primaries are those attached to the ulnar side of the hand; the secondaries, or wing coverts, those of the forearm: the scapulars, those that lie over the humerus; and the bastard feathers, those of the short outer digit. See Illust. of
Bird
, and
Plumage
.
2.
Any similar member or instrument used for the purpose of flying.
Specifically:
(Zool.)
(a)
One of the two pairs of upper thoracic appendages of most hexapod insects. They are broad, fanlike organs formed of a double membrane and strengthened by chitinous veins or nervures.
(b)
One of the large pectoral fins of the flying fishes.
3.
Passage by flying; flight;
as, to take
wing
.
Light thickens; and the crow
Makes
wing
to the rooky wood.
Shakespeare
4.
Motive or instrument of flight; means of flight or of rapid motion.
Fiery expedition be my
wing
.
Shakespeare
5.
Anything which agitates the air as a wing does, or which is put in winglike motion by the action of the air, as a fan or vane for winnowing grain, the vane or sail of a windmill, etc.
6.
An ornament worn on the shoulder; a small epaulet or shoulder knot.
7.
Any appendage resembling the wing of a bird or insect in shape or appearance.
Specifically:
(a)
(Zool.)
One of the broad, thin, anterior lobes of the foot of a pteropod, used as an organ in swimming.
(b)
(Bot.)
Any membranaceous expansion, as that along the sides of certain stems, or of a fruit of the kind called samara.
(c)
(Bot.)
Either of the two side petals of a papilionaceous flower.
8.
One of two corresponding appendages attached; a sidepiece.
Hence:
(a)
(Arch.)
A side building, less than the main edifice;
as, one of the
wings
of a palace
.
(b)
(Fort.)
The longer side of crownworks, etc., connecting them with the main work.
(c)
(Hort.)
A side shoot of a tree or plant; a branch growing up by the side of another.
[Obs.]
(d)
(Mil.)
The right or left division of an army, regiment, etc.
(e)
(Naut.)
That part of the hold or orlop of a vessel which is nearest the sides. In a fleet, one of the extremities when the ships are drawn up in line, or when forming the two sides of a triangle.
Totten.
(f)
One of the sides of the stags in a theater.
On the wing
.
(a)
Supported by, or flying with, the wings another.
–
On the wings of the wind
,
with the utmost velocity.
–
Under the wing of
, or
Under the wings of
,
under the care or protection of.
–
Wing and wing
(Naut.)
,
with sails hauled out on either side; – said of a schooner, or her sails, when going before the wind with the foresail on one side and the mainsail on the other; also said of a square-rigged vessel which has her studding sails set. Cf.
Goosewinged
.
–
Wing case
(Zool.)
,
one of the anterior wings of beetles, and of some other insects, when thickened and used to protect the hind wings; an elytron; – called also
wing cover
.
–
Wing covert
(Zool.)
,
one of the small feathers covering the bases of the wing quills. See
Covert
,
Noun.
, 2.
–
Wing gudgeon
(Mach.)
,
an iron gudgeon for the end of a wooden axle, having thin, broad projections to prevent it from turning in the wood. See Illust. of
Gudgeon
.
–
Wing shell
(Zool.)
,
wing case of an insect.
–
Wing stroke
,
the stroke or sweep of a wing.
–
Wing transom
(Naut.)
,
the uppermost transom of the stern; – called also
main transom
.
J. Knowles.

,
Verb.
T.
[
imp. & p. p.
Winged
;
p. pr. & vb. n.
Winging
.]
1.
To furnish with wings; to enable to fly, or to move with celerity.
Who heaves old ocean, and who
wings
the storms.
Pope.
Living, to
wing
with mirth the weary hours.
Longfellow.
2.
To supply with wings or sidepieces.
The main battle, whose puissance on either side
Shall be well
winged
with our chiefest horse.
Shakespeare
3.
To transport by flight; to cause to fly.
I, an old turtle,
Will
wing
me to some withered bough.
Shakespeare
4.
To move through in flight; to fly through.
There’s not an arrow
wings
the sky
But fancy turns its point to him.
Moore.
To wing a flight
,
to exert the power of flying; to fly.

,
Noun.
1.
The limb of a fowl by which it flies. In a few species of fowls, the wings do not enable them to fly; as is the case with the dodo, ostrich, great auk, and penguin; but in the two former, the wings assist the fowls in running.
2.
The limb of an insect by which it flies.
3.
In botany, the side petal of a papilionaceous corol; also, an appendage of seeds, by means of which they are wafted in the air and scattered; also, any membranous or leafy dilatation of a footstalk, or of the angles of a stem, branch or flower stalk, or of a calyx.
4.
Flight; passage by the wind; as, to be on the wind; to take wing.
5.
Means of flying; acceleration. Fear adds wings to flight.
6.
Motive or incitement of flight.
Then fiery expedition be my wing.
7.
The flank or extreme body or part of an army.
8.
Any side-piece.
9.
In gardening, a side-shoot.
10.
In architecture, a side-building, less than the main edifice.
11.
In fortification, the longer sides of hornworks, crown-works, &c.
12.
In a fleet, the ships on the extremities, when ranged in a line, or when forming the two sides of a triangle.
13.
In a ship, the wings are those parts of the hold and orlop deck, which are nearest the sides.
14.
In Scripture, protection; generally in the plural. Psalm 63. Exodus 19.
On the wings of the wind, with the utmost velocity. Psalm 18.

,
Verb.
T.
1.
To furnish with wings; to enable to fly or to move with celerity.
Who heaves old ocean, and who wings the storms.
2.
To supply with side bodies; as on either side well winged.
3.
To transport by flight.
I, an old turtle, will wing me to some witherd bough.
Edge the keen sword, and wing th unerring ball.
To wing a flight, to exert the power of flying. 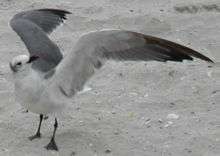 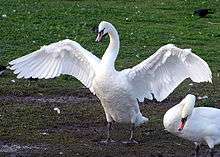 A mute swan spreads its wings. 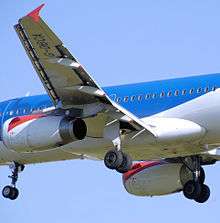 The wing of a landing BMI Airbus A319-100. The slats at its leading edge and the flaps at its trailing edge are extended.
The winged stem of Cirsium vulgare.

part of an animal
slang: human arm
part of an aircraft
extension to a main body
fraction of a political movement
air force unit
panel of a car which encloses the wheel area
extension of a ship's bridge
sports: position in many team sports
sports: person in such position