,
Noun.
[OF.
pan
pledge, assurance, skirt, piece, F.
pan
skirt, lappet, piece, from L.
pannus
. See
Pane
.]
1.
Anything delivered or deposited as security, as for the payment of money borrowed, or of a debt; a pledge. See
Pledge
,
Noun.
, 1.
As for mortgaging or pawning, . . . men will not take
pawns
without use [i. e., interest].
Bacon.
2.
State of being pledged; a pledge for the fulfillment of a promise.
[R.]
Redeem from broking
pawn
the blemish’d crown.
Shakespeare
As the morning dew is a
pawn
of the evening fatness.
Donne.
3.
A stake hazarded in a wager.
[Poetic]
My life I never held but as a
pawn

To wage against thy enemies.
Shakespeare
In pawn
,
At pawn
,
in the state of being pledged.
“Sweet wife, my honor is at pawn.”
Shak.
–
Pawn shop
,
a shop where a pawnbroker does business.
–
Pawn ticket
,
a receipt given by the pawnbroker for an article pledged.

Syn. – hock [colloq].
And
pawned
the last remaining piece of plate.
Dryden.
2.
To pledge for the fulfillment of a promise; to stake; to risk; to wager; to hazard.
Pawning
his honor to obtain his lust.
Shakespeare

,
Noun.
[L. pignus.]
1.
Something given or deposited as security for the payment of money borrowed; a pledge. Pawn is applied only to goods, chattels or money, and not to real estate.
Men will not take pawns without use.
2.
A pledge for the fulfillment of a promise.
3.
A common man at chess. [See Peon.]
In pawn, at pawn, the state of being pledged.
Sweet wife, my honor is at pawn.

,
Verb.
T.
[L. pignero.]
1.
To give or deposit in pledge, or as security for the payment of money borrowed; to pledge; as, she pawned the last piece of plate.
2.
To pledge for the fulfillment of a promise; as, to pawn one's word or honor that an agreement shall be fulfilled.

chess piece
someone who is being manipulated

give as security for loan 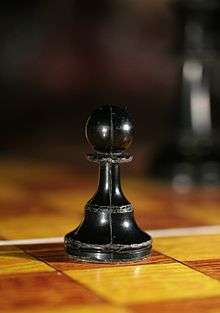