,
Noun.
[AS.
bed
,
bedd
; akin to OS.
bed
, D.
bed
,
bedde
, Icel.
be[GREEK]r
, Dan.
bed
, Sw.
bädd
, Goth.
badi
, OHG.
betti
, G.
bett
,
bette
, bed,
beet
a plat of ground; all of uncertain origin.]
1.
An article of furniture to sleep or take rest in or on; a couch. Specifically: A sack or mattress, filled with some soft material, in distinction from the bedstead on which it is placed (as, a feather bed), or this with the bedclothes added. In a general sense, any thing or place used for sleeping or reclining on or in, as a quantity of hay, straw, leaves, or twigs.
And made for him [a horse] a leafy
bed
.
Byron.
I wash, wring, brew, bake, . . . make the
beds
.
Shakespeare
In
bed
he slept not for my urging it.
Shakespeare
2.
(Used as the symbol of matrimony) Marriage.
George, the eldest son of his second
bed
.
Clarendon.
3.
A plat or level piece of ground in a garden, usually a little raised above the adjoining ground.
“Beds of hyacinth and roses.”
Milton.
4.
A mass or heap of anything arranged like a bed;
as, a
bed
of ashes or coals
.
5.
The bottom of a watercourse, or of any body of water;
as, the
bed
of a river
.
So sinks the daystar in the ocean
bed
.
Milton.
6.
(Geol.)
A layer or seam, or a horizontal stratum between layers;
as, a
bed
of coal, iron, etc.
7.
(Gun.)
See
Gun carriage
, and
Mortar bed
.
8.
(Masonry)
(a)
The horizontal surface of a building stone;
as, the upper and lower
beds
.
(b)
A course of stone or brick in a wall.
(c)
The place or material in which a block or brick is laid.
(d)
The lower surface of a brick, slate, or tile.
Knight.
9.
(Mech.)
The foundation or the more solid and fixed part or framing of a machine; or a part on which something is laid or supported;
as, the
bed
of an engine
.
10.
The superficial earthwork, or ballast, of a railroad.
11.
(Printing)
The flat part of the press, on which the form is laid.
☞ Bed is much used adjectively or in combination; as, bed key or bedkey; bed wrench or bedwrench; bedchamber; bedmaker, etc.
Bed of justice
(French Hist.)
,
the throne (F. lit bed) occupied by the king when sitting in one of his parliaments (judicial courts); hence, a session of a refractory parliament, at which the king was present for the purpose of causing his decrees to be registered.
–
To be brought to bed
,
to be delivered of a child; – often followed by of; as, to be brought to bed of a son.
–
To make a bed
,
to prepare a bed; to arrange or put in order a bed and its bedding.
–
From bed and board
(Law)
,
a phrase applied to a separation by partial divorce of man and wife, without dissolving the bonds of matrimony. If such a divorce (now commonly called a judicial separation) be granted at the instance of the wife, she may have alimony.

,
Verb.
T.
[
imp. & p. p.
Bedded
;
p. pr. & vb. n.
Bedding
.]
1.
To place in a bed.
[Obs.]
Bacon.
2.
To make partaker of one’s bed; to cohabit with.
I'll to the Tuscan wars, and never
bed
her.
Shakespeare
3.
To furnish with a bed or bedding.
4.
To plant or arrange in beds; to set, or cover, as in a bed of soft earth;
as, to
bed
the roots of a plant in mold
.
5.
To lay or put in any hollow place, or place of rest and security, surrounded or inclosed; to embed; to furnish with or place upon a bed or foundation;
as, to
bed
a stone; it was
bedded
on a rock
.
Among all chains or clusters of mountains where large bodies of still water are
bedded
.
Wordsworth.
6.
(Masonry)
To dress or prepare the surface of stone) so as to serve as a bed.
7.
To lay flat; to lay in order; to place in a horizontal or recumbent position.
“Bedded hair.”
Shak.

,
Noun.
[The sense is a lay or spread, from laying or setting.]
1.
A place or an article of furniture to sleep and take rest on; in modern times, and among civilized men, a sack or tick filled with feathers or wool; but a bed may be made of straw or any other materials. The word bed includes often the bedstead.
2.
Lodging; a convenient place for sleep.
3.
Marriage; matrimonial connection.
George, the eldest son of his second bed.
4.
A plat or level piece of ground in a garden, usually a little raised above the adjoining ground.
5.
The channel of a river,or that part in which the water usually flows.
6.
Any hollow place, especially in the arts; a hollow place, in which any thing rests; as the bed of a mortar.
7.
A layer; a stratum; an extended mass of any thing, whether upon the earth or within it; as a bed of sulphur; a bed of sand or clay.
8.
Pain, torment. Rev.2. The grave. Is.57. The lawful use of wedlock. Heb.13.
The bed of the carriage of a gun is a thick plank which lies under the piece, being, as it were, the body of the carriage.
The bed of a mortar is a solid piece of oak, hollow in the middle, to receive the britch and half the trunnions.
In masonry, bed is a range of stones, and the joint of the bed is the mortar between two stones placed over each other.
Bed of justice, in France, was a throne on which the king was seated when he went to parliament. Hence the phrase, to hold a bed of justice.
To make a bed, is to put it in order after it has been used.
To bring to bed, to deliver of a child, is rarely used. But in the passive form, to be brought to bed, that is, to be delivered of a child, is common. It is often followed by of; as, to be brought to bed of a son.
To put to bed, in midwifery, is to deliver of a child.
Dining bed, or discubitory bed, among the ancients, a bed on which persons lay at meals. It was four or five feet high, and would hold three or four persons. Three of these beds were ranged by a square table, one side of the table being left open, and accessible to the waiters. Hence the Latin name for the table and the room, triclinium, or three beds.
From bed and board. In law, a separation of man and wife,without dissolving the bands of matrimony, is called a separation from bed and board, a mensa et thoro. In this case the wife has a suitable maintenance allotted to her out of the husband's estate, called alimony. 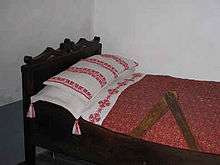 Sense 1. To prepare a bed is usually to "make" the bed, or (US, Southern) to "spread" the bed, the verb spread probably having been developed from bedspread. Like many nouns denoting places where people spend time, bed requires no article after certain prepositions: hence in bed ‎(“lying in a bed”), go to bed ‎(“get into a bed”), and so on. The forms in a bed, etc. do exist, but tend to imply mere presence in the bed, without it being for the purpose of sleep.

piece of furniture
bed as general place or concept
prepared spot to spend the night in
flat surface or layer on which something else is to be placed
foundation or supporting surface
the bottom of a lake or other body of water
area where a large number of shellfish is found
garden plot
platform of a vehicle that supports the load
shaped piece of timber to hold a cask clear — see pallet
piece of music over which a radio DJ talks
deposit of ore, coal etc.
geology: the smallest division of a geologic formation or stratigraphic rock series

This Kurdish entry was created from the translations listed at bad. It may be less reliable than other entries, and may be missing parts of speech or additional senses. Please also see bed in the Kurdish Wiktionary. This notice will be removed when the entry is checked. (more information) April 2008

The traditional etymology as a derivation from the Proto-Indo-European verb for 'to dig' has been doubted, arguing that there are (allegedly) few, if any, cultures known to dig out beds, rather than to build "pads". However, what the Germanic word originally referred to is not known with precision, and it notably has the additional meaning "flower-bed, plot", which is preserved in English and several other modern Germanic languages, but present in older stages as well. Additionally, the term may have originally been used in the sense of a "burial plot" for laying those who were asleep in death, and from there extended also to symbolise a place where one slept in general (In Modern German, two separate words exist, Bett being the normal term, the rare variant Beet having been adopted for “flower-bed”). Perhaps the word originally referred to dug sleeping-places of animals, compare (with the inverse semantic development) lair from Old English leġer ‎(“couch, bed”).