(mȧs)
,
Noun.
[OE.
masse
,
messe
, AS.
maesse
. LL.
missa
, from L.
mittere
,
missum
, to send, dismiss: cf. F.
messe
. In the ancient churches, the public services at which the catechumens were permitted to be present were called
missa catechumenorum
, ending with the reading of the Gospel. Then they were
dismissed
with these words : “Ite, missa est” [sc. ecclesia], the congregation is dismissed. After that the sacrifice proper began. At its close the same words were said to those who remained. So the word gave the name of Mass to the sacrifice in the Catholic Church. See
Missile
, and cf.
Christmas
,
Lammas
,
Mess
a dish,
Missal
.]
1.
(R. C. Ch.)
The sacrifice in the sacrament of the Eucharist, or the consecration and oblation of the host.
2.
(Mus.)
The portions of the Mass usually set to music, considered as a musical composition; – namely, the
Kyrie
, the
Gloria
, the
Credo
, the
Sanctus
, and the
Agnus Dei
, besides sometimes an
Offertory
and the
Benedictus
.
Canon of the Mass
.
See
Canon
.
–
High Mass
,
Mass with incense, music, the assistance of a deacon, subdeacon, etc.
–
Low Mass
,
Mass which is said by the priest throughout, without music.
–
Mass bell
,
the sanctus bell. See
Sanctus
.
–
Mass book
,
the missal or Roman Catholic service book.

,
Noun.
[OE.
masse
, F.
masse
, L.
massa
; akin to Gr. [GREEK] a barley cake, fr. [GREEK] to knead. Cf.
Macerate
.]
1.
A quantity of matter cohering together so as to make one body, or an aggregation of particles or things which collectively make one body or quantity, usually of considerable size;
as, a
mass
of ore, metal, sand, or water
.
If it were not for these principles, the bodies of the earth, planets, comets, sun, and all things in them, would grow cold and freeze, and become inactive
masses
.
Sir I. Newton.
A deep
mass
of continual sea is slower stirred
To rage.
Savile.
2.
(Phar.)
A medicinal substance made into a cohesive, homogeneous lump, of consistency suitable for making pills;
as, blue
mass
.
3.
A large quantity; a sum.
All the
mass
of gold that comes into Spain.
Sir W. Raleigh.
He had spent a huge
mass
of treasure.
Sir J. Davies.
4.
Bulk; magnitude; body; size.
This army of such
mass
and charge.
Shakespeare
5.
The principal part; the main body.
Night closed upon the pursuit, and aided the
mass
of the fugitives in their escape.
Jowett (Thucyd.).
6.
(Physics)
The quantity of matter which a body contains, irrespective of its bulk or volume.
☞ Mass and weight are often used, in a general way, as interchangeable terms, since the weight of a body is proportional to its mass (under the same or equal gravitative forces), and the mass is usually ascertained from the weight. Yet the two ideas, mass and weight, are quite distinct. Mass is the quantity of matter in a body; weight is the comparative force with which it tends towards the center of the earth. A mass of sugar and a mass of lead are assumed to be equal when they show an equal weight by balancing each other in the scales.
Blue mass
.
See under
Blue
.
–
Mass center
(Geom.)
,
the center of gravity of a triangle.
–
Mass copper
,
native copper in a large mass.
–
Mass meeting
,
a large or general assembly of people, usually a meeting having some relation to politics.
–
The masses
,
the great body of the people, as contrasted with the higher classes; the populace.

,
Verb.
T.
To form or collect into a mass; to form into a collective body; to bring together into masses; to assemble.
But
mass
them together and they are terrible indeed.
Coleridge.
2.
Murder.
[Obs.]
Shak.
Syn. –
Massacre
,
Butchery
,
Carnage
.
Massacre denotes the promiscuous slaughter of many who can not make resistance, or much resistance. Butchery refers to cold-blooded cruelty in the killing of men as if they were brute beasts. Carnage points to slaughter as producing the heaped-up bodies of the slain.
I’ll find a day to
massacre
them all,
And raze their faction and their family.
Shakespeare
If thou delight to view thy heinous deeds,
Brhold this pattern of thy
butcheries
.
Shakespeare
Such a scent I draw
Of
carnage
, prey innumerable!
Milton.

,
Noun.
[L. massa, a mass; Gr. to beat or pound.]
1.
A lump; a body of matter concreted, collected or formed into a lump; applied to any solid body; as a mass of iron or lead; a mass of flesh; as mass of ice; a mass of dough.
2.
A collective body of fluid matter. The ocean is a mass of water.
3.
A heap; as a mass of earth.
4.
A great quantity collected; as a mass of treasure.
5.
Bulk; magnitude.
This army of such mass and charge.
6.
An assemblage; a collection of particulars blended, confused or indistinct; as a mass of colors.
They lose their forms, and make a mass
Confused and black, if brought too near.
7.
Gross body of things considered collectively; the body; the bulk; as the mass of people in a nation. A small portion of morbid matter may infect the whole mass of fluids in the body.

,
Noun.
[Low L. missa. The word signifies primarily leisure, cessation from labor, from the L. missus, remissus, like the L. ferioe; hence a feast or holiday.] The service of the Romish church; the office or prayers used at the celebration of the eucharist; the consecration of the bread and wine.

|}
a musical composition set to portions of the Mass 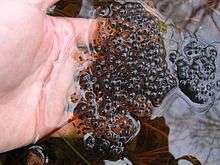 A mass (aggregation) of frog eggs

form or collect into a mass 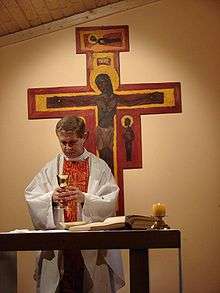 A priest celebrating mass (the Mass)

From Proto-Finnic *maksa, from Proto-Uralic *mëksa.

This noun needs an inflection-table template.

This noun needs an inflection-table template.

From Old English masse, messe, Old English mæsse. Late Latin missa, from Latin mittere, missum, to send, dismiss: compare French messe. In the ancient churches, the public services at which the catechumens were permitted to be present were called missa catechumenorum, ending with the reading of the Gospel. Then they were dismissed with these words: "Ite, missa est", the congregation is dismissed. After that the sacrifice proper began. At its close the same words were said to those who remained. So the word gave the name of Mass to the sacrifice in the Catholic Church. Compare Christmas, Lammas, Mess a dish, Missal