(yōk)
,
Noun.
[OE.
yok
,
ȝoc
, AS.
geoc
; akin to D.
juk
, OHG.
joh
, G.
joch
, Icel. & Sw.
ok
, Dan.
aag
, Goth.
juk
, Lith.
jungas
, Russ.
igo
, L.
jugum
, Gr.
ζύγον
, Skr.
yuga
, and to L.
jungere
to join, Gr. [GREEK], Skr.
yui
. √109, 280. Cf.
Join
,
Jougs
,
Joust
,
Jugular
,
Subjugate
,
Syzygy
,
Yuga
,
Zeugma
.]
1.
A bar or frame of wood by which two oxen are joined at the heads or necks for working together.
A yearling bullock to thy name shall smoke,
Untamed, unconscious of the galling
yoke
.
Pope.
☞ The modern yoke for oxen is usually a piece of timber hollowed, or made curving, near each end, and laid on the necks of the oxen, being secured in place by two bows, one inclosing each neck, and fastened through the timber. In some countries the yoke consists of a flat piece of wood fastened to the foreheads of the oxen by thongs about the horns.
2.
A frame or piece resembling a yoke, as in use or shape.
Specifically:
(a)
A frame of wood fitted to a person’s shoulders for carrying pails, etc., suspended on each side;
as, a milkmaid's
yoke
.
(b)
A frame worn on the neck of an animal, as a cow, a pig, a goose, to prevent passage through a fence.
(c)
A frame or convex piece by which a bell is hung for ringing it. See Illust. of
Bell
.
(d)
A crosspiece upon the head of a boat's rudder. To its ends lines are attached which lead forward so that the boat can be steered from amidships.
(e)
(Mach.)
A bent crosspiece connecting two other parts.
(f)
(Arch.)
A tie securing two timbers together, not used for part of a regular truss, but serving a temporary purpose, as to provide against unusual strain.
(g)
(Dressmaking)
A band shaped to fit the shoulders or the hips, and joined to the upper full edge of the waist or the skirt.
3.
Fig.: That which connects or binds; a chain; a link; a bond connection.
Boweth your neck under that blissful
yoke
. . .
Which that men clepeth spousal or wedlock.
Chaucer.
This
yoke
of marriage from us both remove.
Dryden.
4.
A mark of servitude; hence, servitude; slavery; bondage; service.
Our country sinks beneath the
yoke
.
Shakespeare
My
yoke
is easy, and my burden is light.
Matt. xi. 30.
5.
Two animals yoked together; a couple; a pair that work together.
I have bought five
yoke
of oxen, and I go to prove them.
Luke xiv. 19.
6.
The quantity of land plowed in a day by a yoke of oxen.
[Obs.]
Gardner.
7.
A portion of the working day;
as, to work two
yokes
, that is, to work both portions of the day, or morning and afternoon
.
[Prov. Eng.]
Halliwell.
Neck yoke
,
Pig yoke
.
See under
Neck
, and
Pig
.
–
Yoke elm
(Bot.)
,
the European hornbeam (
Carpinus Betulus
), a small tree with tough white wood, often used for making yokes for cattle.

The conqueror are quickly broke.
Hudibras.

,
Verb.
I.
To be joined or associated; to be intimately connected; to consort closely; to mate.
We 'll
yoke
together, like a double shadow.
Shakespeare

,
Noun.
[G., L., Gr.]
1.
A piece of timber, hollowed or made curving near each end, and fitted with bows for receiving the necks of oxen; by which means two are connected for drawing. From a ring or hook in the bow, a chain extends to the thing to be drawn, or to the yoke of another pair of oxen behind.
2.
A mark of servitude; slavery; bondage.
Our country sinks beneath the yoke.
3.
A chain; a link; a bond of connection; as the yoke of marriage.
4.
A couple; a pair; as a yoke of oxen.
5.
Service.
My yoke is easy. Matthew 11.

, v.t.
1.
To put a yoke on; to join in a yoke; as, to yoke oxen, or a pair of oxen.
2.
To couple; to join with another.
Cassius, you are yoked with a lamb.
3.
To enslave; to bring into bondage.
4.
To restrain; to confine. Libertines like not to be yoked in marriage.
The words and promises that yoke the conqueror, are quickly broke. 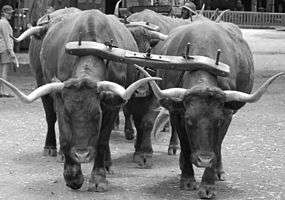 A bow yoke on a bullock team (wooden bar).

wooden bar
pair of animals
wooden frame or bar for a person to carry a pair of buckets
a burden; something which represses or restrains a person
yoke of a shirt
electromagnetic coil
nautical yoke

link or join
unite or connect