,
Noun.
[OE.
slugge
slothful,
sluggen
to be slothful; cf. LG.
slukk
low-spirited, sad, E.
slack
,
slouch
, D.
slak
,
slek
, a snail.]
1.
A drone; a slow, lazy fellow; a sluggard.
Shak.
2.
A hindrance; an obstruction.
[Obs.]
Bacon.
3.
(Zool.)
Any one of numerous species of terrestrial pulmonate mollusks belonging to Limax and several related genera, in which the shell is either small and concealed in the mantle, or altogether wanting. They are closely allied to the land snails.
4.
(Zool.)
Any smooth, soft larva of a sawfly or moth which creeps like a mollusk;
as, the pear
slug
; rose
slug
.
5.
A ship that sails slowly.
[Obs.]
Halliwell.
His rendezvous for his fleet, and for all
slugs
to come to, should be between Calais and Dover.
Pepys.
6.
[Perhaps a different word.]
An irregularly shaped piece of metal, used as a missile for a gun.
7.
(Print.)
A thick strip of metal less than type high, and as long as the width of a column or a page, – used in spacing out pages and to separate display lines, etc.
Sea slug
.
(Zool.)
(a)
Any nudibranch mollusk
.
(b)
A holothurian.
–
Slug caterpillar
.
Same as
Slugworm
.

,
Verb.
I.
To move slowly; to lie idle.
[Obs.]
To
slug
in sloth and sensual delight.
Spenser.

,
Verb.
I.
To become reduced in diameter, or changed in shape, by passing from a larger to a smaller part of the bore of the barrel; – said of a bullet when fired from a gun, pistol, or other firearm.

,
Noun.
[allied to slack, sluggard.]
1.
A drone; a slow, heavy, lazy fellow.
2.
A hinderance; obstruction.
3.
A kind of snail, very destructive to plants, of the genus Limax. It is without a shell.
4.
A cylindrical or oval piece of metal, used for the charge of a gun. 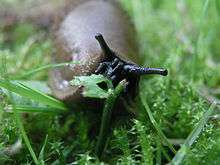