(kwär′tẽr)
,
Verb.
T.
[
imp. & p. p.
Quartered
;
p. pr. & vb. n.
Quartering
.]
1.
To divide into four equal parts.
2.
To divide; to separate into parts or regions.
Then sailors
quartered
heaven.
Dryden.
3.
To furnish with shelter or entertainment; to supply with the means of living for a time; especially, to furnish shelter to;
as, to
quarter
soldiers
.
They mean this night in Sardis to be
quartered
.
Shakespeare
4.
To furnish as a portion; to allot.
[R.]
This isle . . .
He
quarters
to his blue-haired deities.
Milton.
5.
(Her.)
To arrange (different coats of arms) upon one escutcheon, as when a man inherits from both father and mother the right to bear arms.
☞ When only two coats of arms are so combined they are arranged in four compartments. See
Quarter
,
Noun.
, 1
(f)
.

(kwär′tẽr)
,
Verb.
I.
To lodge; to have a temporary residence.

,
Verb.
I.
[F.
cartayer
.]
To drive a carriage so as to prevent the wheels from going into the ruts, or so that a rut shall be between the wheels.
Every creature that met us would rely on us for
quartering
.
De Quincey.

,
Noun.
quort'er. [L. quartus, the fourth part.]
1.
The fourth part; as the quarter of an hour or of a mile; one quarter of the expense. Living is a quarter dearer in the city than in the country.
2.
In weight, the fourth part of a hundred pounds avoirdupois, or of 112lb., that is, 28lb.; as a quarter of sugar.
3.
In dry measure, the fourth of a ton in weight, or eight bushels; as a quarter of wheat.
4.
In astronomy, the fourth part of the moon's period or monthly revolution; as the first quarter after the change or full.
5.
A region in the hemisphere or great circle; primarily, one of the four cardinal points; as the four quarters of the globe; but used indifferently for any region or point of compass. From what quarter does the wind blow? Hence,
6.
A particular region of a town, city or country; as all quarters of the city; in every quarter of the country or of the continent. Hence.
7.
Usually in the plural, quarters, the place of lodging or temporary residence; appropriately, the place where officers and soldiers lodge, but applied to the lodgings of any temporary resident. He called on the general at his quarters; the place furnished good winter quarters for the troops. I saw the stranger at his quarters.
8.
Proper station.
Swift to their several quarters hasten then -
Bacon uses the word in the singular. 'Make love keep quarter.'
9.
On board of ships, quarters signifies the stations or places where the officers and men are posted in action. Pipe all hands to quarters.
10.
In military affairs, the remission or sparing of the life of a captive or an enemy when in one's power; mercy granted by a conqueror to his enemy, when no longer able to defend himself. In desperate encounters, men will sometimes neither ask nor give quarter. The barbarous practice of giving no quarter to soldiers in a fortress taken by assault, is nearly obsolete.
He magnified his own clemency, now they were at his mercy, to offer them quarter for their lives, if they would give up the castle.
Lambs at the mercy of wolves much expect no quarter.
11.
Treatment shown to an enemy; indulgence.
To the young, if you give tolerable quarter, you indulge them in idleness and ruin them. [Rarely used.]
12.
Friendship; amity; concord. [Not in use.]
13.
In the slaughter house, one limb of a quadruped with the adjoining parts; or one fourth part of the carcase of a quadruped, including a limb; as a fore quarter, or hind quarter.
14.
In the menage, the quarters of a horse's foot are the sides of the coffin, between the toe and the heel. False quarters are a cleft in the horn of the hoof, extending from the coronet to the shoe, or from top to bottom. When for any disorder, one of the quarters is cut, the horse is said to be quarter-cast.
15.
In a siege, quarters are the encampment on one of the principal passages round the place besieged, to prevent relief and intercept convoys.
16.
In seminaries of learning, a fourth part of the year, or three months. Tuition and board at twenty five dollars the quarter. This is a moderate quarter bill.
17.
The quarter of a ship, is the part of a ship's side which lies towards the stern, or the part between the aftmost end of the main-chains and the sides of the stern, where it is terminated by the quarter-pieces.
18.
In heraldry, one of the parts or members of the first division of a coat that is divided into four parts.
On the quarter, in seamen's language, is a point in the horizon considerably abaft the beam, but not in the direction of the stern.
Quarter-bill, among seamen, is a list containing the different stations where the officers and crew are to take post in time of action, and the names of the men assigned to each.
Quarter-cloths, long pieces of painted canvas, extended on the outside of the quarter-netting from the upper part of the gallery to the gangway.
Quarter-deck, that part of the deck of a ship which extends from the stern to the mainmast. But in some kinds of vessels, the quarter-deck does not extend to the mainmast, but is raised above the main deck.
Quarter-gallery, a sort of balcony on the quarters of a ship.
Quarter-railing, narrow molded planks, reaching from the top of the stern to the gangway, serving as a fence to the quarter-deck.
Quarter-master, in an army, an officer whose business is to attend to the quarters for the soldiers, their provisions, fuel, forage, &c.; in the navy, an officer who assists the mates in their duties, in stowing the hold, coiling the cables, attending the steerage, and keeping time by the watch glasses.
Quarter-master-general, in military affairs, is an officer whose duty is to mark the marches and encampments of an army, the head-quarters, the place for the artillery, and procure supplies of provisions and forage, &c.
1.
Quarter-staff, a long staff borne by foresters and park-keepers, as a badge of office and a weapon.
2.
A staff of defense.
Quarter-sessions, in England, a general court held quarterly by the justices of peace of each county, with jurisdiction to try and determine felonies and trespasses; but capital offenses are seldom or never tried in this court.
Quarter-round, in architecture, the echinus or ovolo.
Head-quarters, the tent or mansion of the commander in chief of an army. 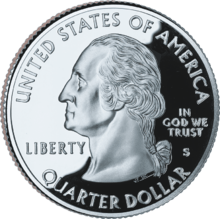 Via French quartier, from Latin quartarius, from quartus.