,
p
rep.
[AS.
in
; akin to D. & G.
in
, Icel.
ī
, Sw. & Dan.
i
, OIr. & L.
in
, Gr.
ἐν
. √197. Cf. 1st
In-
,
Inn
.]
The specific signification of in is situation or place with respect to surrounding, environment, encompassment, etc. It is used with verbs signifying being, resting, or moving within limits, or within circumstances or conditions of any kind conceived of as limiting, confining, or investing, either wholly or in part. In its different applications, it approaches some of the meanings of, and sometimes is interchangeable with, within, into, on, at, of, and among.
It is used: –
1.
With reference to space or place;
as, he lives
in
Boston; he traveled
in
Italy; castles
in
the air.
The babe lying
in
a manger.
Luke ii. 16.
Thy sun sets weeping
in
the lowly west.
Shakespeare
Situated
in
the forty-first degree of latitude.
Gibbon.
Matter for censure
in
every page.
Macaulay.
2.
With reference to circumstances or conditions;
as, he is
in
difficulties; she stood
in
a blaze of light.
“Fettered in amorous chains.”
Shak.
Wrapt
in
sweet sounds, as
in
bright veils.
Shelley.
3.
With reference to a whole which includes or comprises the part spoken of;
as, the first
in
his family; the first regiment
in
the army.
Nine
in
ten of those who enter the ministry.
Swift.
4.
With reference to physical surrounding, personal states, etc., abstractly denoted;
as, I am
in
doubt; the room is
in
darkness; to live
in
fear.
When shall we three meet again,
In
thunder, lightning, or
in
rain?
Shakespeare
5.
With reference to character, reach, scope, or influence considered as establishing a limitation;
as, to be
in
one’s favor
.
“In sight of God's high throne.”
Milton.
Sounds inharmonious
in
themselves, and harsh.
Cowper.
6.
With reference to movement or tendency toward a certain limit or environment; – sometimes equivalent to into;
as, to put seed
in
the ground; to fall
in
love; to end
in
death; to put our trust
in
God.
He would not plunge his brother
in
despair.
Addison.
She had no jewels to deposit
in
their caskets.
Fielding.
7.
With reference to a limit of time;
as,
in
an hour; it happened
in
the last century;
in
all my life.
Syn. – Into; within; on; at. See
At
.

,
adv.
1.
Not out; within; inside. In, the preposition, becomes an adverb by omission of its object, leaving it as the representative of an adverbial phrase, the context indicating what the omitted object is;
as, he takes
in
the situation (i. e., he comprehends it in his mind); the Republicans were in (i. e., in office); in at one ear and out at the other (i. e., in or into the head); his side was in (i. e., in the turn at the bat); he came in (i. e., into the house)
.
Their vacation . . . falls
in
so pat with ours.
Lamb.
In certain cases in has an adjectival sense; as, the in train (i. e., the incoming train); compare up grade, down grade, undertow, after thought, etc.
2.
(Law)
With privilege or possession; – used to denote a holding, possession, or seisin;
as,
in
by descent;
in
by purchase;
in
of the seisin of her husband.
Burrill.
In and in breeding
.
See under
Breeding
.
–
In and out
(Naut.)
,
through and through; – said of a through bolt in a ship's side.
Knight.
–
To be in
,
to be at home;
as, Mrs. A.
is in
.
–
To come in
.
See under
Come
.

,
Noun.
[Usually in the plural.]
1.
One who is in office; – the opposite of
out
.
2.
A reëntrant angle; a nook or corner.
All the
ins and outs
of this neighborhood.
D. Jerrold.

(ĭn)
,
Verb.
T.
To inclose; to take in; to harvest.
[Obs.]
He that ears my land spares my team and gives me leave to
in
the crop.
Shakespeare

, a prefix, L. in, is used in composition as a particle of negation, like the English un, of which it seems to be a dialectical orthography; or it denotes within, into, or among, as in inbred, incase; or it serves only to augment or render emphatical the sense of the word to which it is prefixed, as in inclose, increase.
In, before l, is changed into il, as in illusion; and before r, into ir, as in irregular; and into im, before a labial, as in imbitter, immaterial, impatient.

, prep. [L. in.] In denotes present or inclosed, surrounded by limits; as in a house; in a fort; in a city. It denotes a state of being mixed, as sugar in tea; or combined, as carbonic acid in coal, or latent heat in air. It denotes present in any state; as in sickness or health. It denotes present in time; as in that hour or day. The uses of in, however, cannot, in all cases, be defined by equivalent words, except by explaining the phrase in which it is used; as in deed; in fact; in essence; in quality; in reason; in courage; in spirits, &c. A man in spirits or good courage, denotes one who possesses at the time spirits or courage; in reason is equivalent to with reason; one in ten denotes one of that number, and we say also one of ten, and one out of ten.
In the name, is used in phrases of invoking, swearing, declaring, praying, &c. In prayer, it denotes by virtue of, or for the sake of. In the name of the people, denotes on their behalf or part; in their stead, or for their sake.
In, in many cases, is equivalent to on. This use of the word is frequent in the Scriptures; as, let fowls multiply in the earth. This use is more frequent in England than in America. We generally use on, in all similar phrases.
In signifies by or through. In thee shall all nations be blessed. I am glorified in them.
In that, is sometimes equivalent to because.
Some things they do in that they are men; some things in that they are men misled and blinded with error.
In these and similar phrases, that is an antecedent, substitute, or pronoun relating to the subsequent part of the sentence, or the subsequent clause. God commendeth his love towards us, in that while we were yet sinners, Christ died for us. That is, in the fact stated in the latter clause, for which that is the substitute. Rom.5.
In as much, seeing; seeing that; this being the fact. I will ride for health, inasmuch as I am infirm.
In is often used without the noun to which it properly belongs. I care not who is in, or who is out, that is, in office, or out of office. Come in, that is, into the house or other place. Who has or will come in, that is, into office. A vessel has come in, that is, into port, or has arrived.
To be or keep in with, to be close or near.
Keep the ship in with the land.

See also: Appendix:Variations of "in"

See also: Appendix:Variations of "in" 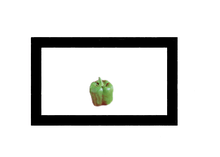 A green pepper in a black rectangle. 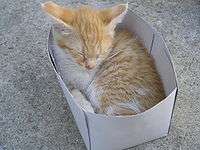 contained by
surrounded by
part, member of
pertaining to
after a period of time
within a certain elapsed time
by the virtue of
into
during
a state
language, script, or tone

indoors; at home or the office and available for conversation
moving to the interior
still able to play

position of power
state of batter

in ‎(comparative more in, superlative most in)

Pronominal adverbs of in

in ‎(used only predicatively, not comparable)

This variant of i is used before vowel-initial words, before bhur ‎(“your pl”), before dhá ‎(“two”), before titles of books, films, and the like, and before foreign words that resist mutation.

From Old Dutch in, from Proto-Germanic *in.

Borrowing from Latin in ‎(“in”).

Borrowing from English in.

From Proto-Slavic *i (from Proto-Indo-European *h₁ey) and an emphasising particle *no.

declension of in
possessive forms of in